My current game project is being written in C++, which is my second favorite programming language.  My favorite is Ada.

Ada doesn’t get that much attention among most programmers and it’s a shame.  My favorite way to describe it is “C++ without all the C baggage.”  Whenever people talk about wanting a better C++, I tell them that it already exists.  It’s called Ada.

For those unfamiliar with it, Ada was originally developed for the US Department of Defense.  Ada is a language that doesn’t fool around.  It was designed for the sort of programming where bugs are completely unacceptable.  Software where glitches could have disasterous consequences.  Think air-traffic control systems, missile guidance, railway switching, and so on.  Over the years, Ada has evolved into a robust and full-featured general programming language.  It’s the only language I’m aware of that can stand toe-to-toe with C++ in terms of features.  I love it.

I’ve been toying with game development in Ada for several years.  I’ve done a few toy-projects, and one very large one that unfortunately never made it across the finish line.  It’s a fine language for that sort of work.  The only problem is libraries.

I love writing library interfaces for Ada.  In the past I’ve done complete Ada bindings for both OpenAL and OpenGL.  I really want to do my next PC project in Ada, and I also want to make the jump to from OpenGL to Vulkan.  Thus, the VulkAda project was born.

If there’s already an Ada binding for Vulkan, I haven’t found it.  Even if there is one, I still want to make my own.  Most Ada interfaces to C APIs aren’t very Ada-like.  GCC even includes a tool that will generate Ada specification files from C headers.  They work, but they’re awkward to use due to fundamental differences in the languages.  String handling is an excellent example.  Ada strings and C strings are incompatible with each other.  Ada provides all the tools necessary to convert to back and forth, but it’s pain to do this in user code so I want this nonsense wrapped up.

VulkAda is something I work on when I have nothing else to do.  It’s a long tedious process, but I’m finally starting to see the light at the end of the tunnel.  I’ve nearly completed the Vulkan 1.0 API.  My C header goes up to 1.2, so that’s where I’ll stop for now.  Check this out: 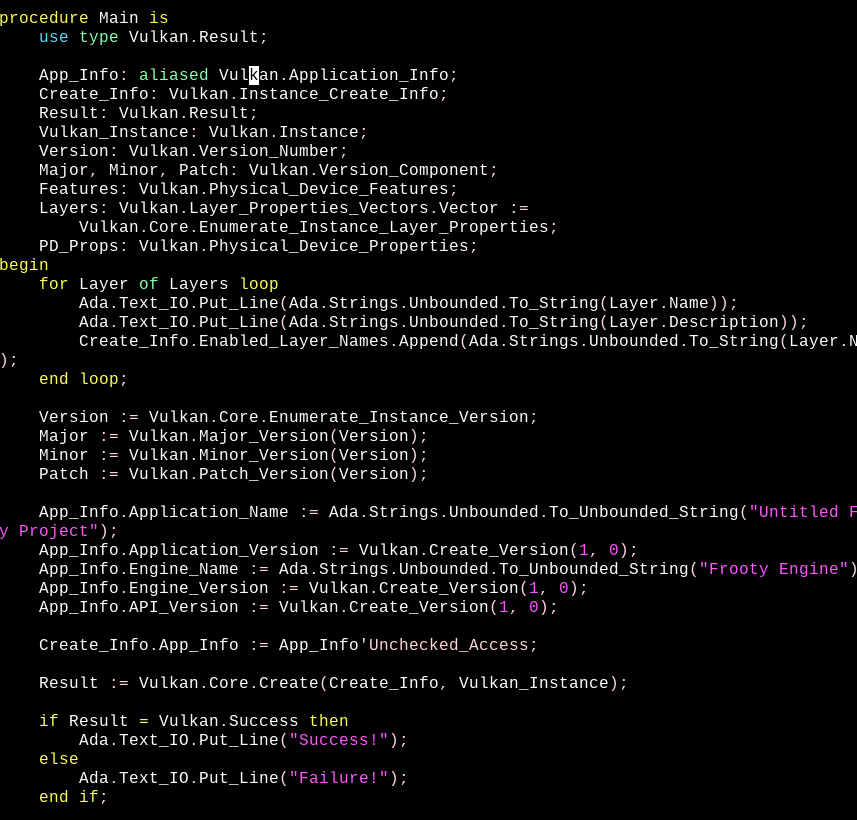 Here’s some simple test code I wrote using my Vulkan interface.  It doesn’t do much, just queries the video card for some properties and creates a Vulkan instance, but it works!  I have a matching C program that I compare the output with and it’s an exact match, so I must be doing something right.  Running this little program produces this: 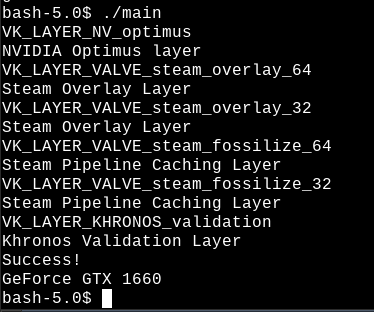 This is the list of Vulkan layers supported by my video card.  I have no idea what a Vulkan layer is, but there they are!

Oh yeah, that’s the other fun thing about this.  Despite binding most of the Vulkan 1.0 API, I’ve still never really used Vulkan.  I still have a lot to learn.

When I start my next game, which for now shall be referred to as “Untitled Frooty Project,” I’ll finally get the chance to give this stuff a thorough testing.  I plan to make VulkAda available once that project starts, with the understanding that it’s a work-in-progress and parts of it will almost certainly change as my game develops and I find bugs.  Fun stuff, and I can’t wait to start working with it.