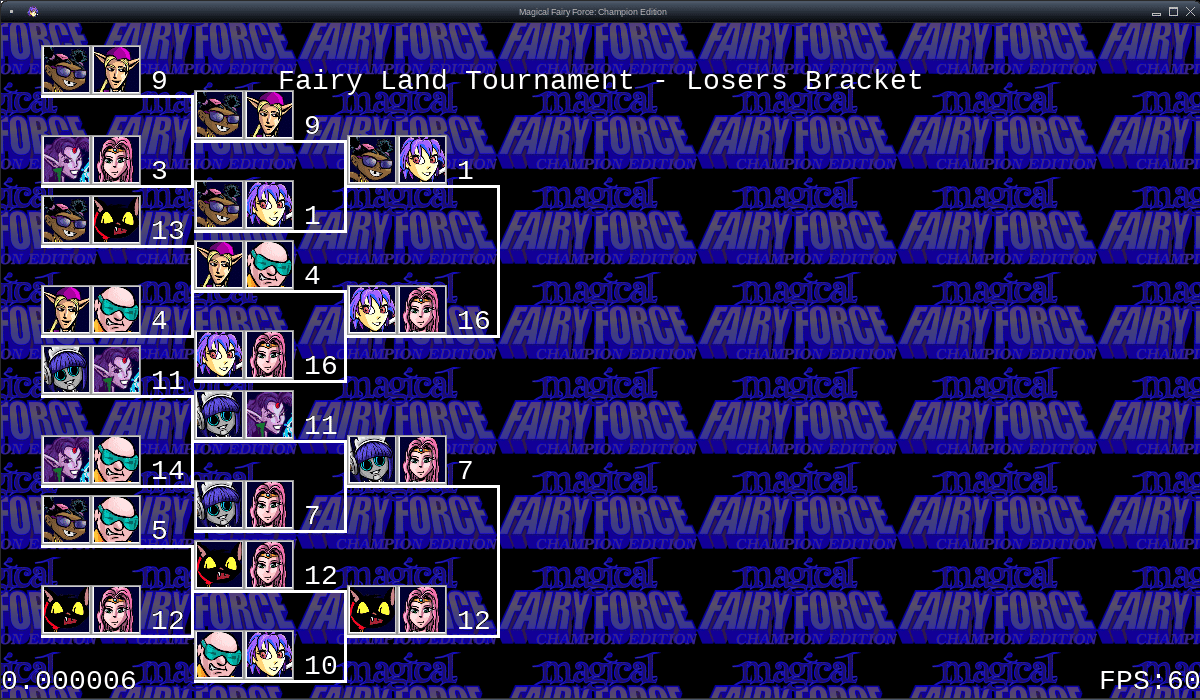 I’ve been putting in a lot of work on the tournament modes for Magical Fairy Force, and I finally have all eight of them functioning. 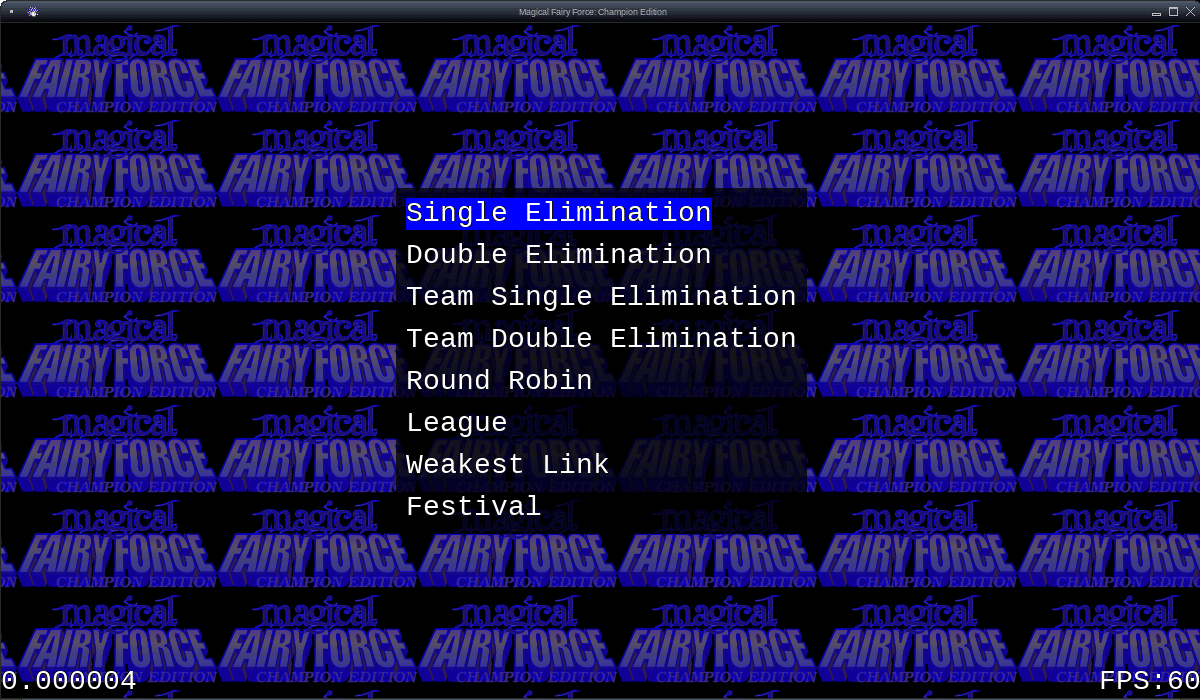 The first four tournament types are pretty simple.  Traditional single and double elimination brackets, in both single entry and two-player team modes.  They support 3-16 entries, and figuring out how to construct some of the more unusual tournament brackets was a challenge.  I’m glad I did though, because now you can play a tournament when you only have five people and it will work.

The next tournament type is Round Robin, and this one is very simple.  3-16 players enter, and every player fights every other player once.  A standings sheet is kept updated throughout and the player with the best record wins.

The League tournament is a hybrid of the Round Robin and Single Elimination tournaments, both conceptually and in the code (hooray for C++ multiple inheritance!).  It starts off exactly like the Round Robin tournament, but at its conclusion all the players are seeded into a single elimination bracket based on the final standings.  Fight through the playoff bracket to determine the winner.

Weakest Link is based on the online-versus mode from the extremely interesting and simplified fighting game Fantasy Strike (available on Steam, go check it out!).  In this tournament, two players build a team of 2-16 unique characters.  Matches are fought between randomly selected characters from each team.  The winner of each match has their character removed from the team.  The first player to win with every one of their selected characters wins the tournament.

The last tournament, Festival, might be my favorite.  Last year I ended up getting into the fun little animated adventure series RWBY, and this mode is inspired by the Vytal Festival tournament from season 3 of that show (hence the name).

The tournament in the show began with a round of battles between teams of four.  Each winning team chose two of their members to advance to the next round, which featured two on two matches.  Each winner of that round selected one person to advance to the one on one knockout round that would decide the champion.

This game doesn’t have four on four games, but it does have the others.  In the Festival tournament 3-16 two character teams face off, and each winning team selects one character to move on to the finals. 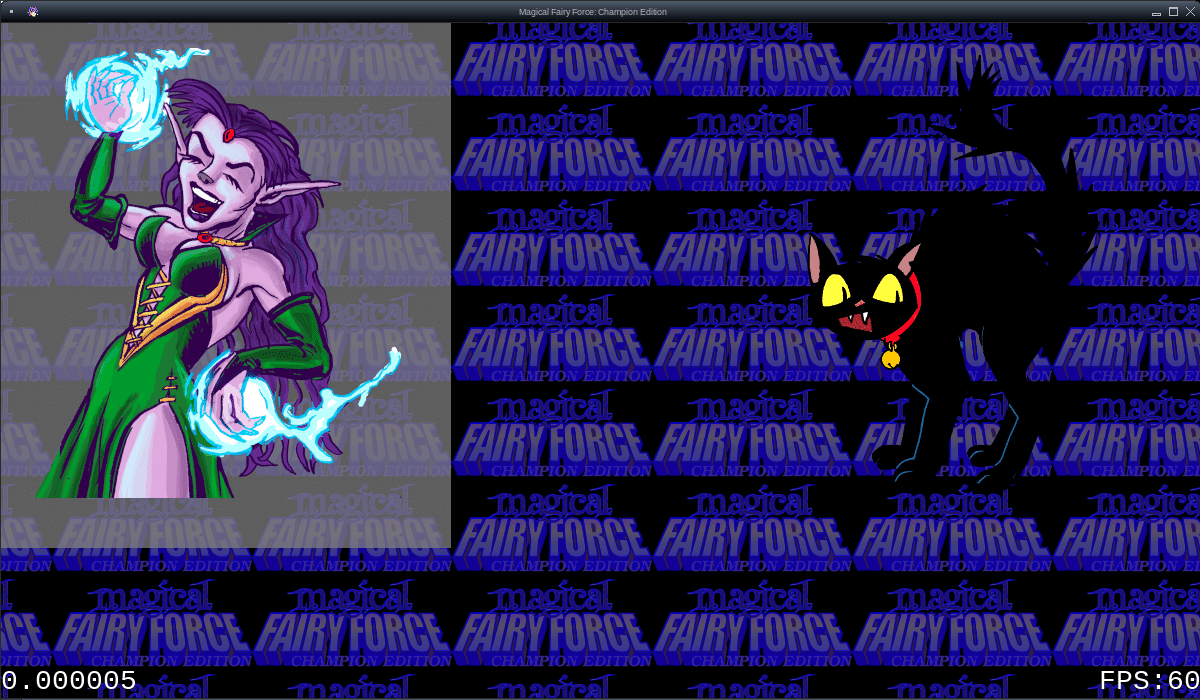 In the finals, the chosen representatives square off in random matches until a champion is crowned.

All of these tournaments are fully functional, although I need to add some more screens and make others prettier.  The Festival representative selection screen above is a great example.  It does its job, but it needs more.

Some of these tournaments can run quite long, so I’ve also been putting together a save/load feature for tournaments.  I have this working for most of the tournament types but there’s no real interface for it yet.  I’m really happy with how they all turned out and I think they’ll be super fun, if not a little insane.